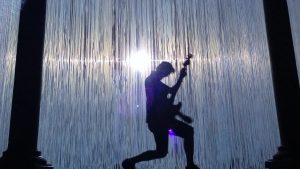 “I always hated the mouth organ, until tonight!”   Simone Warner

” Andy is the most creative bass player I’ve ever had in my band, he has become so integral to my sound and vibe that I feel as though he is literally like one of the vital organs that makes it live and breathe, and he plays the bass with such dexterity and melody and rhythm. To be honest, before Andy came along I had never heard it played like that before. He is my favourite bass player and he can play other instruments too, what more could you want!!!! ”  NATACHA ATLAS

‘Well, what can I say?’  Niels-Henning Ørsted Pedersen – after being invited to play a tune at his masterclass…  (I’m still not sure whether that was really good or really bad!)

Theo Travis Quartet at The Bull, London – John Fordham in The Guardian, September 2001

‘IS THAT A MOUSE OR A JAZZ BASSIST? Amazing how fast you can can forget the double bass player is wearing a mouse’s head. Maybe it’s to do with the compelling magnitude of the instrument itself. Or maybe, in the case of young British bassist Andy Hamill, (who happened to have found a pantomime mouse head in The Bull’s props room and decided to get the feel of it for a tune or two), it’s because the effortless silky swing of his softly persuasive playing makes everything but the music fade into the background.’

‘And the rhythm section was superb, in particular the double bassist who, although he looked about 15, provided a constant, sinuous undertow that curled up inside your belly and made you want to get freaky deaky, as they say in ‘Boogie Nights”. 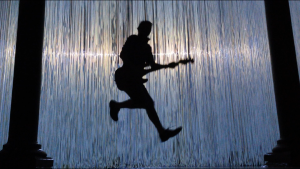 ‘His solo evoked a vision of JS Bach nodding slowly, approvingly, understanding the structure, the tone, the phrasing…it was like a Partita, or one of the cello suites, (played them daily on bassoon). Magical’
(Matt – bassonist and singer)
See the ‘bass notes’ article in the Nov 2004 ‘BASS PLAYER’ magazine, to find out about how Andy approaches the bass, for a transcription of his ‘Camel’s Back’ bass part, and to know what kind of strings Andy uses….   probably the ones that were on there when he bought it!! 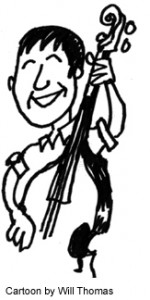 It sneaks into the blood stream. And it goes without saying that double bass afficionados should purchase forthwith.

Hamill is one of the busiest double bassists in town. For proof examine the variety of guests on his debut, ‘Bee for Bass’. It’s a delightful record that pitches the bassist into sparse chordless duos and trios with a genre-defying, cross-atlantis array of singers, percussionists and instrumentalists.

Hamill’s playing has graced many a straightahead session (he’s a regular with saxophinist Theo Travis’ quartet) but he is increasingly first call for dance-friendly artists such as drum ‘n’ bass crew 4-Hero, Nitin Sawhney and, ahem, Kylie Minogue. It takes a brave bassist to record 14 tracks without chords, but Hamill’s duets work brilliantly.

Too many to list, but highlights include ‘Dear Love’ with country star Jeb Loy Nichols; a superb ‘Four Minutes of fun’ with the sharp-tounged poetess, Ursula Rucker; a swinging ‘Farmer’s Market’ with Anita Wardell (on particularly sweet form); and engaging stuff from Mark Murphy, and Brit soul star Omar. On the instrumental front, saxophinists Chris Bowden and Ben Castle are also outstanding.

Sweet fondness between fine friends is the essential feel of this album by talented Londoner Hamill. He uses his upright bass and little else to accompany vocalists and an occasional saxophonist performing well-written, mostly new tunes. Hamill employs his plush tone to great effect, using harmonics and polyphonic ostinatos, swinging jazz walking lines, and simple pop support to complement each distinctive and delightful ditty.

Very much a masterclass in the double bass, Andy Hamill holds together this wide collection of collaborators with bass playing of exceptional quality and range. You’ll never think of the double bass as boring again.

If Andy Hamill were booked to play with a singer and the rest of the band failed to turn up, it might be a blessing. This showcase album proves that he is amply capable of providing rhythm, chords, improvised solos and even backing vocals without help from anyone. He’ll write the arrangements too, if required.

The young Scottish bassist has worked with some heavyweight vocalists in his short career in Jazz, and he’s managed to persuade an impressive number of them to make cameo appearances on his album. Carleen Anderson, Anita Wardell, Mark Murphy, Trudy Kerr, Ursula Rucker, Rosie Brown, Shea Seger and Rebecca Hollweg are just a some of the singers who contribute. Light percussion and occasional interjections of bass clarinet, harmonica and saxophone add spice, but the focus is always on the relationship between bassist and singer.

Hamill’s double bass is heard is all its glory on this well-produced set. The bassist displays a golden tone, and excellent command of chord and harmonicas, and good intonation. The material ranges from delicate, funky and virtuosic, to amusing and Frank Zappa-style silly. Such and album could turn out to be self indulgent, but bass solos are kept to a minimum, so showing off is not on the agenda. For bassists this album is a lesson in how to work with singers. It is well balanced, makes great listening, and will enlighten anyone unsure of what the double bass is capable of.

Bass is the Place

What do Ursula Rucker, Omar, Carleen Anderson, Chris Bowden, Valerie Etienne, Jeb Loy Nichols and bop/scat singer Mark Murphy have in common? They are all on ‘Bee for Bass’, the independent debut album of Andy Hamill.

When I ask contra-bassist Andy Hamill about the hand drawn cover of his album and the faces of the contributors – Omar, Ursula Rucker, Chris Bowden, Mark Murphy, Jeb Loy Nichols, Carleen Anderson, Rosie Brown et al – pasted into the heads of flowers he laughs, “yes, it’s a very silly cover but there are so many records out there that try and be cool, I just wanted it to be friendly”. Actually, this LP is both friendly and cool. Very cool.

This independently produced album, which has been two years in the making, illustrates what being a working musician is all about. Andy has played on over 100 albums and the contributions on this LP reflect the high regard in which he is obviously held. ‘Bee for Bass’ is a collection of 14 songs and the format is bass plus voices and a touch of percussion with the odd instrumental deviation from saxophonist Chris Bowden on ‘Mothers and Daughters Now Mothers’, and Ben Castle (bass clarinet) with Tom Gordon (castanets) on ‘Sally Tomato’. “We formulated the idea in the car, on the way back from a gig with my wife Rebecca Hollweg”, explains Andy. “Someone had dropped out and it ended up as just bass and voice. We’d had such a good time we thought it would make a good project”. Hip American jazz singer Mark Murphy was the first person he recorded, and he contributes two typically quirky offerings. “He’s special. He’s a big hero of mine. I first heard him duet with a bassist on his album ‘The Nat Cole Songbook’. I’ve played with him whenever he’s in Europe or the UK since 1996. He knows everyone, he’s played with so many people. I also got him to write and perform some words for 4 Hero (‘Twelve Tribes’ on ‘Creating Patterns’). I suggested him to Mark Mac and Dego. He’s quite cosmic. He wrote ‘Love and Money Don’t Mix’ and the words to ‘Planet formerly known as Moon’, he gave me a tempo then we just improvised. There’s also a secret track he appears on”.

The first three tracks are guaranteed to blow you away. Shea Seger’s husky and breathy ‘Camel’s Back’ sets the vibe, and is followed by a lovely duet between Rebecca Hollweg and new country singer Jeb loy Nichols. Andy met Jeb while working with the Underwolves and maintains, “he has a beautiful voice”. Next up come another 4 Hero connection, Ursula Rucker, with the dazzling “Four Minutes of Fun” – check Shri’s flute and tablas. This track is currently getting the “Bollywood string” remix treatment from Marc Mac and violinist Julian Ferraretto. Forget categories, this CD dances from one genre to another in a most refreshing fashion. Fellow Scot and jazz legend Annie Ross, of ‘Lambert Hendricks and Ross’, couldn’t make the session in the end, but Aussie singer Anita Wardell does a fine job scatting on the Art Farmer/Annie Ross composition ‘Farmer’s Market’. “Being a bass player you end up playing all different styles of music and from a bass player’s point of view it’s all the same…as a musician you don’t see the boundaries”. Curious to know how the duet between Omar and Valerie Etienne came about, the bassist explained that when he started the LP he was playing with ‘Two Banks of Four’ and depping occasionally with Omar. He’d played on Val’s solo LP (‘For What It Is’) and asked her which song she’d like to sing. The result was ‘Seasons’. “Omar writes amazing bass lines, really memorable.

A lot of people have said that’s their favourite song on the album”, declares Andy before going on to sings the praises of Carleen Anderson. “I worked on her album ‘Albert’s Granddaughter’, she’s one of those people who can send a shiver down my spine. It’s amazing how she uses her voice. When I was mixing ‘Falling’ her voice took up so much space. S-o-o-o-o thick”. Anther challenging musician who writes great bass lines, according to Andy, is Chris Bowden. “He just improvised the arrangement…made it up on the spot. One take each on soprano and alto. You always know it’s him immediately. We’d worked together on both his albums, and with 4 Hero…did some great gigs”. The album concludes with Tony Penultimate’s ‘This was your life’, which is a cross between Slim Gaillard and the Bonzo Dog Band and like Mark Murphy, proves that there is space for a sense of humour. Apparently, every session was filmed and there may yet be a limited edition DVD. Watch out for that, along with that Ursula remix, and a new album from Rebecca. Andy Hamill is one busy bee!